I’ve just raced in two big events, the World Masters in Florida and the Pairs Head in London. Here’s a brief account of how I got on in these two very different Masters environments, plus some thoughts about Masters racing generally. What is it that makes it so interesting, and so different to mainstream competitive rowing?

I went to the World Masters Regatta in Sarasota to compete in the Mens D singles, and arrived with low expectations. Having clocked up many miles of sculling during the summer while coaching at Bergerac, I was reasonably fit. But I had been so distracted by responsibilities that I had done nothing in the way of sprint race training, start practice, or simple power building.

The weather was great, there were masses of interesting people to meet, the rowing lake was brand new with state-of-the-art facilities, the atmosphere was friendly and cheerful. The problem was that I felt I had no chance, and was wondering why I had bothered to come all this way.

The need for confidence

Not bad – but not quite good enough.

By the time my D Singles final arrived, though, I saw that my earlier pessimism had been not only misplaced, but counter-productive. It’s true what they say about Positive Thinking: “Yes we can”, and all that. You need to believe that winning is possible. Or at least that doing better is possible.

So instead of dwelling on my feeble excuses (inadequate preparation, unfamiliar water, jet lag, morbid fear of alligators, whatever) I needed to focus on what I could do to overcome these largely imaginary problems, and to correct the things I knew I was doing wrong. 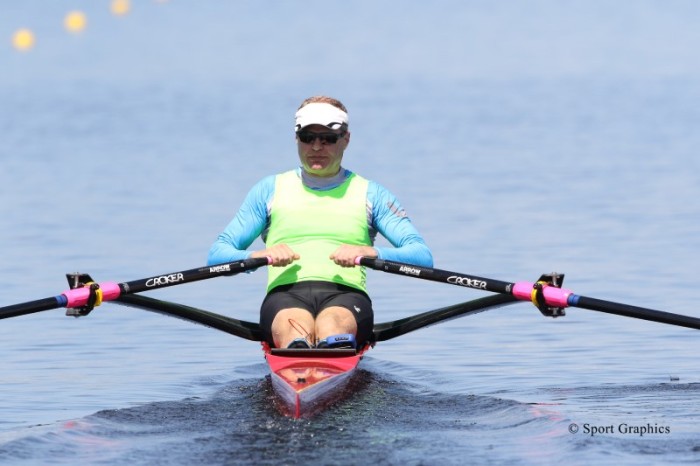 A bit better. Finally getting the hang of this water.

A less tentative start, for one thing. A more aggressive wind-up. A more distinct contrast between a well-delivered and powerful drive and the relaxed, well-sequenced recovery. A quicker, lighter catch. These are the areas where I know there is, almost always, room for small further improvements without the need for further power input. For the first 500m of the final, the improvements I needed eluded me – but the second half it all came together nicely and I was closing the gap at a good rate.

As it turned out, I came tantalisingly close: the time record suggests that if I had been 3 seconds faster I might just have won – although Ransom Weaver looks like one of those obstinate types who keep some acceleration in reserve, so 3 seconds might not have been enough. But the whole thing was an exhilarating and memorable experience, and in the end I was very glad that I went.

Sarasota was a big event, superbly well-organised, with over 9,000 competitor seats filled. Predominantly American contestants, of course, but with visitors from all over the world, especially from Japan, many of whom were of surprisingly advanced years.

Nobody could say they hadn’t been warned

Kosta and I have been rowing together in doubles, on and off, for the past 10 years. Henley in 2008 was our first big race together.

So 2018 was our opportunity to win it two years in a row.  We would be odds-on for our category in the double: but after much deliberation we decided to race a pair, even though neither of us had been in a pair for about 20 years, and had not previously raced together in one.

Winning the 2017 Pairs Head in a double 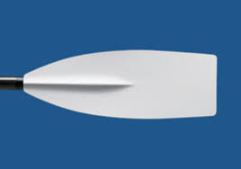 Kosta had been using wooden macon blades the last time he was in a pair (symmetrical spoons, rather than the modern “hatchet” shaped blades: seldom used today for racing, but very useful for teaching) which dates him well back into the 20th Century.

We went for a practice paddle in the pair with modern Concept2 hatchet blades, and loved the experience, partly I think because there was so much scope for improvement. We decided to race the pair to see where we stood on the longer races, and then make a plan for the British Masters 2019.

We rowed the 10 miles down from Twickenham to get to the start. This was intended as a “warm up”, but the cold wind, rain and choppy water was a quite a shock after a summer of smooth water and sunshine in Bergerac followed by ten days in Florida. I was shivering hard at the start, despite a waterproof top and thermal layer. But as the start time approached, the excitement took over from the discomfort. The lining up, seeing the opposition, wanting to do as well as possible, counting down the seconds. The adrenaline gets going, and you realise that this moment before a race begins is your reason for rowing.

It was an eventful race, with a major crisis occurring halfway through at around 2000 metres when the third boat we were overtaking made a steering mistake and instead of giving way as they intended swung straight towards us, resulting in a tangle of oars and a delay of around 10 seconds while we extricated ourselves. On top of this, we had the rain and wind blowing hard against the stream – a combination which causes a particularly nasty kind of chop which is well-known to Thames regulars, but must have surprised some of the visitors. Despite these obstacles – or perhaps because of them – the race was tremendous fun. We were keeping up a good pace, dealing with the problems as they arose, and it felt good.

Winning the 2018 Pairs Head in an actual pair

It felt even better the next day when we discovered that we had won our category by a margin of 5 seconds. Whatever our own setbacks had been, the others must have had even more of them.

Why did we switch?

On the face of it, switching to a pair when we already had a winning formula in a double seems an eccentric thing to do. One reason was to pay tribute to the great Croatian brothers Martin & Valent Sinković whose loyal fans we are. After dominating the double sculls discipline and remaining unbeaten for three years, these two did something rare in rowing: they changed classes to compete in the coxless pairs.

When they won the 2000 m Men’s Pairs final at the 2018 World Championships in Bulgaria in September it was their fifth gold at the world championships but the first in the new discipline: and this made them the first rowers in history to achieve consecutive wins in two different classes.

Their 2015 training video (best viewed without soundtrack) shows several routines we’ve been using in Bergerac, alongside our own video footage of ChezB pupils in our analysis sessions.

A specific example: 2.21 into the video they start a routine – I call it the three-quarters-square drill – which has improved the catch position and speed of many crews and scullers I’ve coached.

Things we have in common with the Brothers: like them, we train on RP3 machines, use the Quiske telemetry system from Finland, and believe that training in singles is one of the most effective way to make any team boat faster.

And now that Kosta and I have won our Masters category in a double in 2017 and a pair in 2018, we too have achieved our aim of winning in both classes in consecutive years. Being naturally modest, of course, we wouldn’t presume to stretch the Sinković comparison any further…

One of the most interesting aspects of Masters racing is the way priorities evolve over the years. As you progress from one category towards the next, there are always new challenges to face. Having just turned 50 I’m a new arrival in the D level, so I’ll have a slight age advantage for a year or two, which will gradually turn to a disadvantage as I approach the E category threshold in 2023.

Each year there will be a new batch of strong, fit 50-year-olds to contend with, along with the latest batch of aches and pains in my back, arms and legs. Which is more important: staying ahead of these upstarts – or keeping my body in proper working order?

Keep the Doctor Away

When you’re young, competitive sport is all about winning. That’s what really matters to you – and avoidance of injury is a means to that end. Find your physical limits, push yourself right up to them, then go beyond if you can. If you injure yourself in the process, too bad: you have learned something useful about your limits, and your body will soon heal.

As you get older, things begin to look different. Injury avoidance, in particular, ceases to be a means to an end, and becomes an end in itself. You know from experience (often painful) where your limitations lie. You also know that the body recovers more slowly. Winning can remain an aim, an aspiration, perhaps a fantasy: but what matters more than winning is the fact that you’re still competing, doing the best you can, and above all remaining in action. It’s a subtle change of attitude, but it’s an important one.

One of the recurring themes in my own coaching is Yoga for Rowers, its role in injury prevention, and its particular relevance to Masters rowing. I’ll be returning to this subject soon. Meanwhile, Kosta and I will be doing our daily stretching exercises, along with some hard thinking about how to prepare for the British Masters, not to mention Budapest, in 2019.

2 thoughts on “Back in action at the Masters”

After a year of lockdown, plans are being dusted off off in anticipation of normal life resuming in 202. We hope to get back to coaching activities starting in July, concentrating on our Sculling with Yoga programme.

However we still don't know how the Anglo-French regulatory regime is going to evolve for mixed groups, so these plans will have to be provisional. Meanwhile, though, the house and its facilities can be offered on a weekly rental for exclusive use by a single tenant. This can be an attractive option for a family or a small Club group which can manage itself as a “bubble”.

We did some very successful weeks on this basis in 2020, and  have some enquiries for 2022. Coaching and support are available in each of our three main activities - sculling, yoga and cycling - and catering too can be arranged as required. Please use the Contact form to register your interest, either as a single tenant or a course member, and we'll get back to you to discuss the options.Contact