Tony Martin crushed the field en route to his second-stage win of the 2014 Tour de France.

There’s no shortage of good cycling routes around Bergerac. One I’m keen to try is the 2014 Tour de France Stage 20 time-trial to Perigueux, as won by the great Tony Martin. Early October would be good for me. It would be best to do it with a group:  who would like to join me? 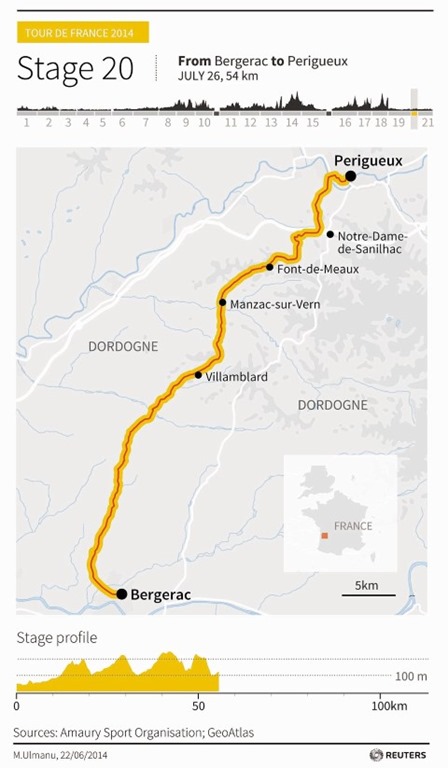 October 2016 Update.
I can’t do it this month after all, as the house is currently uninhabitable, being minus roof, power, water and a staircase.  So it’ll have to be in 2017.

The good news is that the Tour is coming back, and will be doing this route again – Stage 10, Tues July 11th. So the week starting 9th July should be an exciting time for cyclists in Bergerac.  I shall set about getting a party of cycle-minded rowers together for the occasion.

The scullers are back in Bergerac, and things are looking good for 2023.

The summer training season which starts in July and runs through to September. is when Ali Boileau and a team of helpers will be coaching small groups of scullers, and running his Sculling with Yoga course. You can join one of his groups either individually, or as a member of a club or school booking.

Alternatively you could consider taking the house as a tenant. Rentals are weekly, Sunday to Saturday, and subject to availability can be at any time outside the summer season. There are some advantages to this approach. The main difference is that coaching and equipment hire are not included with the house-rental, but can be set up separately as required. This helps you match your week's activities to your own needs and interests.

Either way, the first step is to get in touch and let us know in principle what you would like to do. We can then discuss the options. Contact