Progress report from a roofless house

It takes a bit of nerve to strip the roof off one’s house in October.  I’ve never previously tried it, and would not particularly recommend it as a way of calming the nerves.  But in case you are considering it, I can report that it does not feel too bad if you have a Project Manager such as Didier Grandjean in charge of operations.

One of Bergerac’s leading architects, Didier has designed a new roof structure which will add a new floor in what was formerly a low and unused attic.  To realise the design, he must now co-ordinate the activities of joiners, plasterers, bricklayers, electricians, plumbers and concrete specialists, as well as materials and equipment suppliers.  He has already spent many long hours over the past year negotiating a formidable regulatory and planning obstacle course.

The reason so much co-ordination of trades is needed is that building contractors of the kind one might use in the UK or USA have largely disappeared in France.  This is to do with France’s inflexible labour laws, which make it difficult to hire and fire in the way that contractors need to do as work fluctuates.

Instead, individual tradesmen work independently, and are assembled into ad hoc teams by project managers like Didier.  It’s more  responsibility than most British architects are accustomed to taking on. And a lot more work.

Anyway, last week a fleet of trucks arrived with a team of builders who quickly and efficiently took off the roof.

The remains of the roof en route to the dump 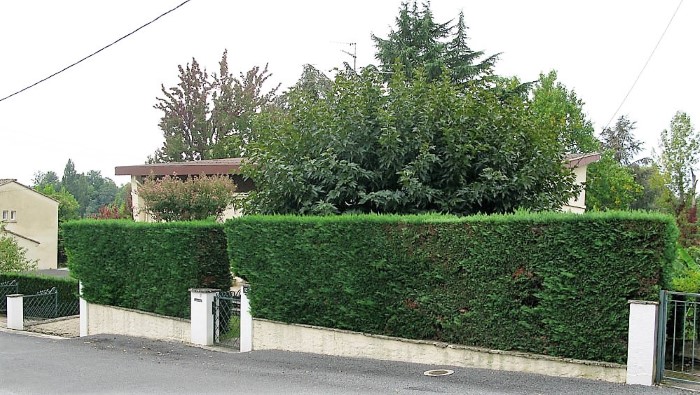 The house was always somewhat “deceptive”, to use the famous estate-agent word, in that it was larger than its unobtrusive appearance from the street would suggest. This is because it is built on a steep slope, so the lower part cannot be seen from the front.

CGI impression of the new roof, which will be about a metre higher

The new cedar-clad vertical extension, which will add about a metre to overall height at the apex, will increase the building’s visibility from the front. But the front will still look fairly minimal compared with the back, whose previously blank top façade will be replaced with four big windows looking SW towards the river.

The main feature of the new floor will be a studio room running the full width of the house, and measuring 4.5m x 12m. The intention is to use this big new space mainly for group activities such as training, exercise, yoga classes, etc. Didier refers to it on his drawings as the Salle de Sport.  At the front, there will be two   new bathrooms and a further room which could be a meeting room or a fifth bedroom.

But there is a lot to do first.  The side walls are being built up currently, and then the new roof beams and panels will arrive.  Meanwhile here I am in London, anxiously watching the weather reports for SW France. I’ll be going back in a week or so to check progress, and a further report will follow.

After more than a year of lockdown, normal life in Bergerac is resuming. Coaching for individual visitors starts in July, and will be based on our increasingly popular Sculling with Yoga programme.

However, most of the individual course-member places for our 2022 summer training season are now booked, aside from a few vacancies in the week commencing 14th August.

But after all the activity of the World Masters regatta at Libourne in September has subsided, the house and its facilities can again be offered on a weekly rental to groups represented by a single tenant. Coaching and support can be provided as required in each of our three main activities - sculling, yoga and cycling - and catering will normally be part of the package. This can be an attractive option for a family or a small Club party which can manage its own group arrangements.

Correspondence about bookings in 2023 will soon be starting. So if you're thinking of coming, please use the Contact form to register your interest, either as a house tenant or an individual course member. We can then get back to you to discuss the options. Contact