Instead of returning as usual to the parental home for Christmas 2016, I dropped everything and went back to school. This was the Sivananda Yoga Teacher Training Course at Reith, near Kitzbühel – a famously demanding learning programme which begins every day at 5.30 am, continues until 10.00 pm., allows no meat, alcohol or coffee, and goes on for 4 weeks

It was hard, sometimes painful work. But despite the strenuous regime, the time passed quickly, and it was an unforgettable experience. In this post I’ll try to describe what it was like, and why it was worth doing.

The Sivananda Yoga Teacher Training Course takes place at Reith, a little way up the valley from Kitzbuhel in the Austrian Tyrol.

After many years in the roles of teacher, coach and assessor, going back into pupil mode was good for me. I’d been doing quite a lot of learning lately, having recently taken up the viola, while trying urgently to improve my French. Gradual, incremental improvement is the aim; regular practice is the method.

But this Yoga course was a different kind of proposition: unrelenting, concentrated and highly structured, it’s designed to give a group of experienced amateurs a solid grounding in as many aspects of yoga as possible, and to turn them into competent instructors.

The teachers (or swami, as they are called) told us how Swami Vishnudevananda, the creator of this course, had aimed to distill the basics of twelve years of learning into a single month. A nearly-impossible task, one might think.

But aiming for the nearly-impossible is one of the things you do in Yoga, isn’t it? So they, the swami (and we, the pupils) were going to give it a go. And what a setting! There we were up a mountain, a stone’s throw from that infamous piste with its terrifying 85% gradients, just before the Hahnenkamm downhill race – the mere thought of being in which makes me tremble with anxiety. What more inspirational setting could you imagine for the start of a Yoga crash course?

As both Christmas and the New Year were included, we were a smaller class than usual – only around 20 people. Usually they have at least twice that number on this course. But only few people, it seems, can extricate themselves from family festivities at that time of year. Which was good news for those of us who did make it, as we had the best possible teacher-pupil ratio.

With the stern figure of the great Swami Sivananda looking on from the past, a less-than-perfect performance on the viola for the New Year talent contest

We were a truly international group.

Leonard, a Dutchman, was an expert practitioner and tutor of Mindfulness.
Stephan an Australian-Austrian was already an experienced yoga teacher, and runs courses with his girlfriend all around Europe. They believe in the value of lots of cardiovascular exercise combined with a vegan diet.
Max and Natalia, two wonderful Russians, told us about how yoga groups like theirs have fallen out of favour with the Orthodox Church in Russia, which suspects them of heresy. (Which is odd, as there seems to be no such thing as Yoga-phobia elsewhere in the world.)
Elisabeth, a highly competent German, was notable for her exemplary scorpion poses.
Ghilveness, a Latvian, was undoubtedly the most skilful practitioner among us, having been a classical dancer for many years (he was the only one able to get his feet behind his head). He made the lotus headstand and peacock poses look easy. I’d like to film him doing some of his sequences (such as the “Sun-Salutations”), as his flow was a work of art.
Everyone on the course had something to offer…
Camillo’s beautifully crafted poetry
Katja’s mischievous irreverence,
Jahna’s and Larissa’s irrepressible joi-de-vivre
Bryan – a Taiwanese bon-viveur living in Amsterdam
the list could go on… a wonderful group of people.

The days all started with us up at 5:30 for a 30 minute session of silent, motionless meditation, followed by at least an hour of continuous, and equally (supposedly) motionless chanting of Sanscrit mantras. These were concluded with a short sermon-like address.

We followed the early meditation and chanting with a practice of yoga postures, called Asana, such as the headstand or shoulderstand. These Asana sessions – in the Sivananda approach – emphasise finding the right blend of balance, breathing and relaxation for each posture. We grew to love the Savasana (sometimes called the Corpse pose – just lying flat on the back with legs and arms apart) which is the very important relaxation position.

We really needed these “active relaxation” interludes, just to catch up on sleep and rest. All the Asana had their Sanskrit names, both for the main postures and the counter-poses (to balance the body and muscles). This is what it was all about for me; what I wanted to learn to do more effectively myself, and learn to teach others correctly and safely.

Breakfast – the first meal of the day – was not until 10am. A vegetarian diet, with no tea or coffee, but dairy products allowed. Beans, yoghurt, rye bread, cheese  – all of excellent quality – and having been up for nearly 5 hours, I was hungry enough to eat plenty of this. A very different concept, though, to the “Full English Breakfast” plateful favoured for post-training refuelling by my carnivorous crew-mates on the Thames at our regular Sunday sessions.

After breakfast we had a period of household tasks such as sweeping, cleaning and tidying (“Menial’s not a word we use around here… try Karma”) and this was followed by a lecture on historical texts, which explained the philosophy and spirituality which underlies the practice of yoga. Then a second lecture on more practical issues, focused initially on anatomy, and later on the different aspects of Prana (energy) and how it flows through the body.

And so on for the rest of the day.  After the first fortnight, practical teaching sessions started in the afternoon, with accompanying lectures and tutorial guidance. Then more meditation & chanting – Essay writing to be fitted into whatever free time could be found or made. –  Review of notes and set texts – End-of day chanting (Vespers equivalent) – Bedtime at 22.30.…

Much of this was new territory for me. Hitherto, I had seen yoga purely in the light of a few particular instances of the Asana – the stretching and counter-balancing exercises for the muscles – which I had found aided recovery in my training. By inserting a yoga session into the sequence, I found I was able to get quickly back to being ready for another rowing, sculling or cycling session. Without the yoga, I might have been feeling too stiff or physically drained to carry on.

Minor repairs. I also found that Yoga-based Recovery is about more than just energy levels and general flexibility – it also helped me deal with those minor pulls or strains, and the consequent niggling pains which had regularly put me out of action in earlier years. With regular yoga sessions, these setbacks were hugely reduced. Yoga had helped reduce or eliminate post-outing ham-string tightness; and this in turn stopped back-aches. It kept the spine flexible and helped maintain the full range of movement. Best of all, it halted the run of strains and fractures in my ribs, which had been delicate ever since a car accident many years back. In short, it invigorated my entire training programme. 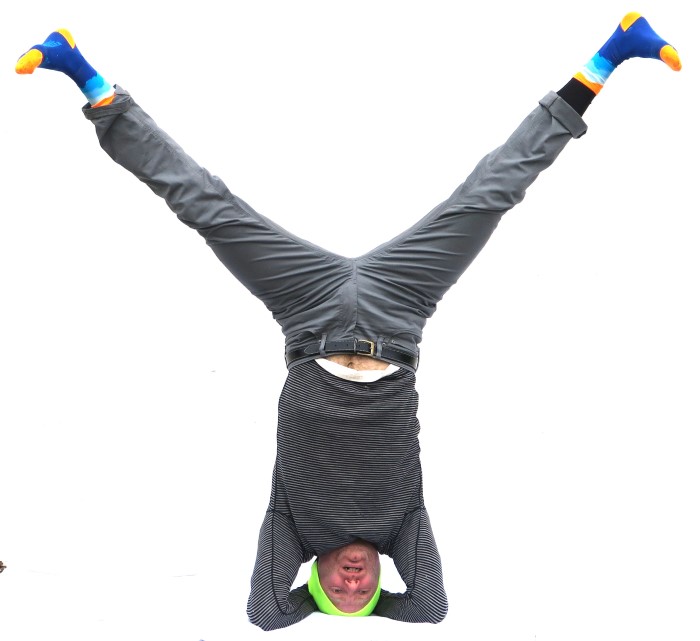 This was why I wanted to learn more. I needed to find out which of the other Asana poses would be useful in sports training. How should these be combined into standard sequences or routines? And how should the mental and spiritual aspects of Yoga, which had completely passed me by in the past, be included in such a way that they could contribute to improved performance? And having acquired these insights, how should I set about teaching the relevant skills to my own pupils in an effective and consistent way?

These are big, wide-ranging questions and I cannot pretend that I have all the answers. What I can say is that I’m now on the right track, and that this course has given me a whole new understanding of the immense, and (I suspect) largely untapped, potential of Yoga as part of a specialised training regime. I’ll be writing more on the subject before too long.

If you’ve read this far, you might enjoy the book written by the designer of our course – The Complete Illustrated Book of Yoga by Swami Vishnudevananda. .

This is getting it from the horse’s mouth, as they say. It’s all in there, clear and straightforward.

Another book I took with me, and can highly recommend, was Yoga Explained by Francis Yeats-Brown, published in 1937. Yeats-Brown is best-known as the author of the autobiographical memoir Lives of a Bengal Lancer (which was made into a Hollywood blockbuster in which he was portrayed by Gary Cooper).

Yoga Explained is largely forgotten in the West, but is still in print in India (albeit with rather unsatisfactory bindings). It turns out to be a perceptive and beautifully written book. I discovered it only last year when I met some cousins at a Yeats-Brown family funeral (my great-grandmother’s sister had married a Yeats-Brown) and they told me about their uncle’s book. If you can find it, read it! 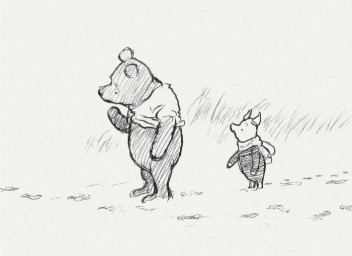 Finally, one key text which is always with me in spirit, and which you won’t have any trouble finding: The House at Pooh Corner. The hero, an admirably calm stuffed bear, is often quoted for his wise Swami-like pronouncements – although some critics reckon he was more of a Taoist than a Hindu. Never mind – the sayings are spot-on. EG:

Clearing your mind: Don’t underestimate the value of doing nothing, of just going along, listening to all the things you can’t hear, and not bothering.
Going into neutral: Sometimes I sits and thinks, and  sometimes I just sits…
Living for the moment: “What day is it?” “It’s today,” squeaked Piglet. “My favourite day,” said Pooh.
The futility of worry: “Supposing a tree fell down, Pooh, when we were underneath it?” “Supposing it didn’t?” said Pooh after careful thought. Piglet was comforted by this.
Universal awareness: Sometimes, if you stand on the bottom rail of a bridge and lean over to watch the river slipping slowly away beneath you, you will suddenly know everything there is to be known.

2 thoughts on “How to Become a Swami”

After more than a year of lockdown, normal life in Bergerac is resuming. Coaching for individual visitors starts in July, and will be based on our increasingly popular Sculling with Yoga programme.

However, most of the individual course-member places for our 2022 summer training season are now booked, aside from a few vacancies in the week commencing 14th August.

But after all the activity of the World Masters regatta at Libourne in September has subsided, the house and its facilities can again be offered on a weekly rental to groups represented by a single tenant. Coaching and support can be provided as required in each of our three main activities - sculling, yoga and cycling - and catering will normally be part of the package. This can be an attractive option for a family or a small Club party which can manage its own group arrangements.

Correspondence about bookings in 2023 will soon be starting. So if you're thinking of coming, please use the Contact form to register your interest, either as a house tenant or an individual course member. We can then get back to you to discuss the options. Contact